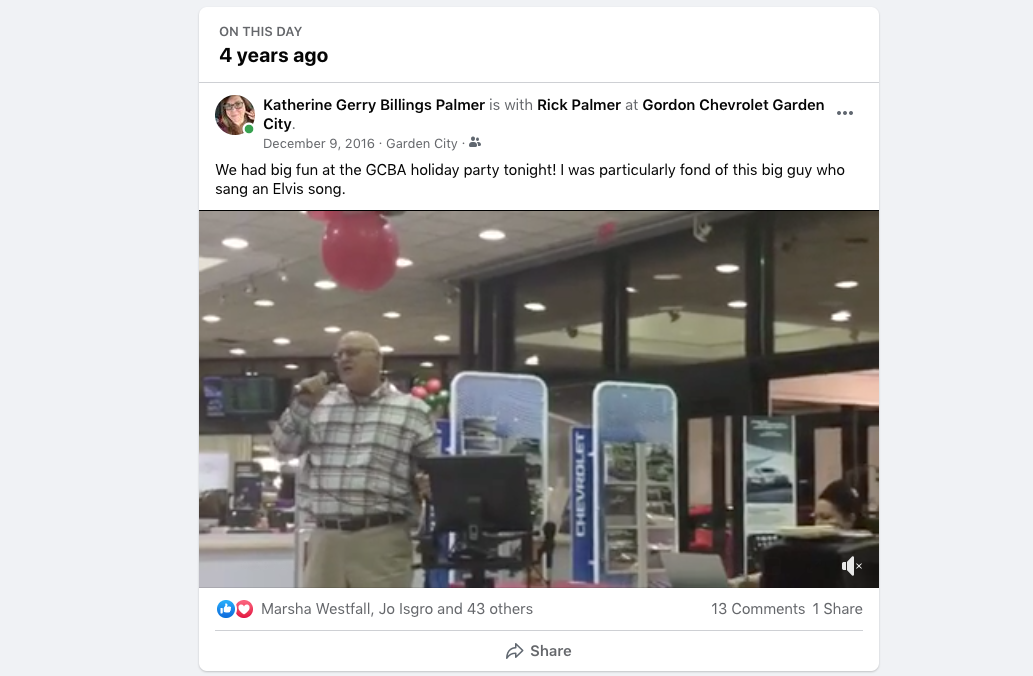 Oh Facebook, you’re killing me. Here I sit again with tears streaming down my face. Note to self: do not check the Facebook memories until you’re really prepared for it.

The memories that seem to get me are the ones from four years ago, the last good year with Rick. From January to August 2016, life was normal. But then it began, the low sodium issue that was diagnosed during a routine wellness visit led to the discovery of the small tumors invading Rick’s lungs and nearby lymph nodes. Which meant he was one of the “lucky” ones: this elusive symptom caught by an alert doctor gave us an early shot at beating a cancer that often doesn’t display symptoms until the tumors are so large there are only a couple of months left and no chance of survival.

The chemo and radiation were started quickly – and that was how we spent the end of 2016: four chemo cycles spaced weeks apart, each consisting of three days of IVs and blood transfusions and white cell boosting shots, plus dozens of lung radiation treatments and the medications necessary to combat the effects of the awful attempted cure.

And now, four years after the ordeal and three years after his death, a lifetime of memories crop up on Facebook and I can’t resist looking. Where were we on this day in 2011 or 2013 or 2015? Look at the fun life we shared! Look at those restaurants we went to, the bonfires we sat near, those trips to Florida, those sunsets on beaches and dinners on our deck! Look at that – all that evidence that we lived, and we loved, and we celebrated life together. And now I can relive it all just by clicking on that “Memories” feature on Facebook.

And every time I see the ones from 2016, I’m afraid to look – but I do anyway. And I think, oh look, that was our last Halloween, our last fall tour of the leaves, our last Thanksgiving. Look – it’s my last spectacular 60th birthday party, the one that Rick insisted on throwing for me in November, despite being sick and weak after suffering through more chemo. Look, that was our last Christmas with the kids and grandkids, that was our last… everything.

And I remember how I felt back then, at each event and holiday. I remember gazing at him and wondering how long I would have him and if this was truly our last dance on earth.

Today’s memory was a video – December 9, 2016. Rick was singing karaoke at the annual Christmas party held by a group of local business owners and friends. In the video, he’s singing Elvis’s “I Can’t Help Falling in Love With You,” a song he had sung to me many, many times at karaoke events throughout the past 20 years. Hearing him sing that song made me weepy in the good times and attacks me savagely watching it now.

Did anyone at that festive event realize what I did – that he had survived a horrible week? Chemo regimen #3 finished on Wednesday and this was Friday. He had also begun the 40-something lung and brain radiation treatments and had, in fact, endured one earlier that day. He was sick and he was tired. And he wanted to go out and forget it all – the pricks and prods, the tests and treatments. He wanted to forget the cancer and the fear and go to a party with our friends. So we did.

I can tell in the video that he’s not himself. There are a few little giveaways that reminded me – near the end of the song, he looks a little unsteady as he braces himself with the microphone stand. But, otherwise, he looks hale and hearty. He’s still my big, strapping husband singing with his deep bass melodic voice about how he couldn’t help falling in love. And here I sit alone, four years later, watching the Facebook memory of that last night of festivity and song – and I thank my lucky stars, once again, that when he did fall in love, he fell in love with me.

One Reply to “A Lifetime of Memories on Facebook”