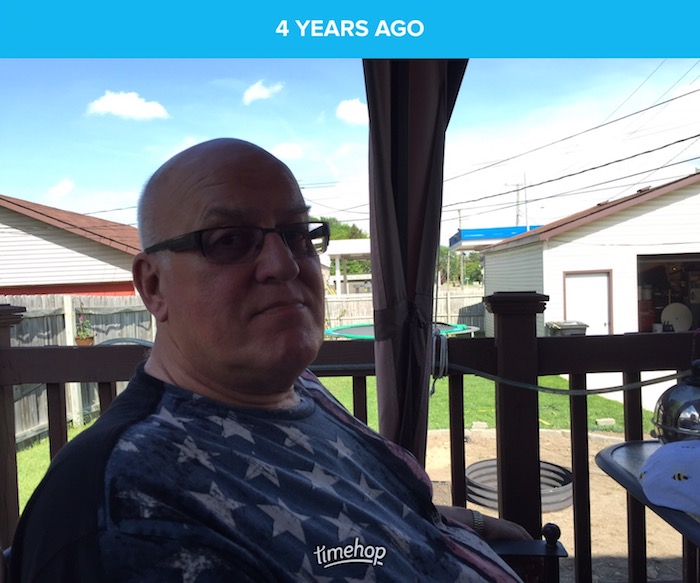 This morning, I made the mistake of looking at my Timehop app before I got out of bed. Two years ago today, Saturday, May 27th, at 8:58 a.m., I took two videos. The first was Rick snoring softly beside me, with his favorite blanket nearly covering his entire head. In the second video, I started recording his face as he slept, and then panned down to see his huge body taking up his side of the bed.

Months earlier, when Rick was first diagnosed with small cell lung cancer, I spent a lot of time searching the Internet to find advice for the spouse of a cancer victim. I especially wanted to find ideas for how to cope with helping my husband through the ordeal. I came across a few websites with practical advice for what to have in the house after chemo treatments, and other medical tips, but one woman’s advice stood out on an emotional level. She expressed the need to video and photograph everything, absolutely everything. She pointed out that we often take pictures of special events, but we don’t often record the day-to-day typical conversations. By that time, based on the doctor’s prognosis and data I had uncovered while researching  Rick’s type of cancer, I had come to the reluctant conclusion that Rick probably wouldn’t be around much longer. The doctor bluntly stated that the tumors would be destroyed by the chemo/radiation routine, but they’d grow back in a year or so, and when that happened, there would be only experimental treatments available.

Whatever the odds, I kept up a brave front for Rick, because he really hoped he’d beat those depressing statistics, but deep down I knew. I knew I would not be spending the rest of my life with him. I also knew that one day in my awful future alone, I would cherish everything and anything that I recorded of his actions, habits, words. So I began taking the pictures and recording the videos that I hoped would help me keep him alive after he was gone. .

Not that this is unlike me. As my family has often complained, I’ve always been one to take a lot of photos and videos. I was thrilled when Rick bought me a video camera for my birthday in 2001, when we finally could afford technology gadgets. I was sad that I had missed so many of my son Brandon’s years growing up because I didn’t have the money to purchase a video camera back then, but I had friends who loaned me theirs for big occasions. Of course this was all before the advent of smart phones which allowed me to record more memories in the last year of Rick’s life than would have been possible in any other decade.

And with the phone, it was also possible to record him anywhere and everywhere – and sometimes without his knowledge. For years, when we went on vacations or went looking for new places to live, or just rode along in the car on one of Rick’s favorite little adventure days when he enjoyed wandering about, I would record things as we drove along. Some of the scenes were really boring to rewatch. Many of them were just videos of scenery that sped by – like the neighborhood leading to some condos we were looking at, but never ended up buying. But the audio in the background was of the two of us discussing things, so I ended up with a treasure trove of video after video of us gabbing. I now have a history of us chatting about where we were going to go next, or what we liked about the neighborhood we were driving through, or just talking over our plans for what we’d do later in the day. So now I have these wonderful unexpected snippets of our lives to enjoy when I need a little reminder of his voice, his style of talking, his enthusiasm, his essence.

And those recordings were mostly before the diagnosis. After the diagnosis, I tried to record as much of our day-to-day existence as I could, often without letting him realize I was doing it. Rick was no fool. He was wise enough to understand why I’d be recording more often than usual, and I didn’t want him to get the feeling that I was betting against him, that I thought he wouldn’t make it and I’d need these to look back on.

Which brings us to today’s Timehop. At nearly 9 a.m., Rick was still in bed, and that in itself was not normal. He was always an early riser, even well into his retirement. But on that morning, seeing him there reminded me that I may not have much more time to enjoy this man lying next to me in our bed, so, as he slept, I took two videos to record it for posterity.

And this morning, seeing him in that video from two years ago pierced my heart. It hurt in a way I haven’t hurt in a while. Seeing Rick alive and sleeping next to me in our bed brought it all back: the fear that he’d be gone soon, the absolute panic that I’d never survive without him by my side, the awful dread about the future and how much he might suffer, and the awareness that I needed to enjoy my time with him and love him as much as possible before he was gone. And a little more than two months later, on August 13, all those fears were realized.

As I watched the video replay over and over this morning, I thought back to what I was doing last night. I was at my niece and nephew’s annual Memorial weekend party. And of course, memories of all those past parties Rick and I had attended together had been flying through my mind as I sat out on their deck. But later in the evening, I was talking with an old friend, a woman I had spent many an evening with as a young single 20-something more than forty years ago. Diane and I, and our friends Jackie and Nancy, had spent a couple years meeting up to drink beer and dance to the disco tunes that poured out of the jukebox at the Student Body Lounge. We danced and drank and laughed, and spent our nights looking for Mr. Right (and finding many, many Mr. Wrongs). Diane’s single again, too, and we were discussing the best places for single women of our mature age to go to meet men nowadays, in this new era, now that the disco bars have long been closed. And after our chat, I felt a little more hopeful about this new single life ahead. I sensed that the future may be interesting, and that moving forward may be fun.

And now, this morning, those hopeful thoughts flew out the window. I don’t want to get back “out there” and go to singles events. I feel guilty for even thinking such thoughts. In fact, I don’t want to go anywhere. I want to stay here with Rick, with his photos, and his videos, and my memories. I want to dream that he’s back snoring softly next to me in this bed. I want to think about him, remember him, and hear his voice in my head. I want to rebel against life, and continue to mourn him, and the fact that he was taken from me. I don’t want to build a future without him – by myself or with anyone else. I don’t want to let go of the past.

So, here I am, once again, in that familiar place. As my counselor agreed, at some point, it really is a choice. It’s a choice to stop grieving, to choose to live once again among the living.

And I know what I need to do: I need to pull up my big girl pants and continue to create a life without Rick, and that’s a hard and bitter pill to swallow. I have to let go. I have to accept the things I cannot change.

I have to live – and live without him.

So, I will give myself a little more time to grieve this morning, to cry out the remaining tears over what was and what will never be again. I will rise from this bed of memories, and shower and dress and find something to take me out of my own head. I had planned to enjoy breakfast alone on my deck this morning, but I think instead I’ll go to the local diner and chit-chat with the waitresses.

And I’ll make my plans for today. I’ll remind myself that I’m still alive and have a lot of living to do. And I will assure myself that these feelings will recede, once again. And in a few minutes, or perhaps an hour or so, life without him will seem normal again. Before I know it, I’ll be myself again.

And I imagine this will remain a part of widow life for some time to come – the ups and downs, the highs and lows, this roller coaster of emotions. And as time moves on, I’ll get used to the ride.

One Reply to “The Man Who Slept Beside Me”