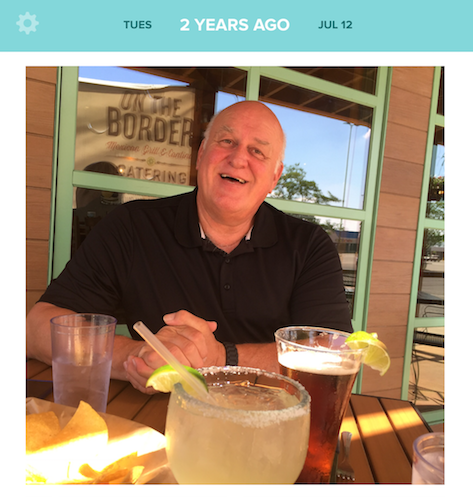 I thought it may all be past me now, the feeling of devastation, the tsunami of pain. Apparently, it wasn’t.

I feared it would be a day filled with the pain of his loss, but it wasn’t so bad. I think the anticipation of a milestone event can often be worse than the day itself.

I woke up a little sad, but that’s to be expect. I drove home alone from my vacation with the family. That took up a good 4 and ½ hours. I killed time in the car listening to talk radio, my David Sedaris book, and sometimes just drove in silence – alone with my thoughts, lots of thoughts. I was sad, no doubt, that he wasn’t here with me, anticipating our anniversary date night, or weekend away, or whatever. Sad. Not devastated, just sad.

I had a hair appointment at 2pm, and that was a small perk. Poof! Traci got rid of the gray and we commiserated – she who had been there the morning of our wedding, with her mimosas and appetizers and magic hair skills. I remembered sitting outside in the sunshine that morning, drinking our spiked OJs and listening to my son Brandon playing the piano inside the apartment – a gift from him on my wedding morning. I left the appointment feeling a little lighter. Gray gone, young again! (I wish.) Well, younger, I guess, and widowed, and still sad, sad that Rick wouldn’t be waiting outside or at home to tell me he loved my hair and how nice I looked. Sad, but I’m used to it now.

My niece Marsha offered to do anything or nothing to help me through the evening. You just never know what will make it easier. Cocooning or busyness? Trying to ignore the event, or diving in and doing some traditional activity? After gleaning suggestions from several of the widows on the Hope for Widows private group, I went with doing something Rick and I would have done together. The fact that Antman and the Wasp was released this week couldn’t be a coincidence! That’s where we would have been, so after a meal at our fav Mexican restaurant, Marsha and I went to the movie. I warned her in advance that she had to nudge me when Stan Lee made his cameo appearance. It’s tradition. We both cracked up when he finally did.

I had a nice time. I’m thankful for Marsha, and for the other family members and friends who called or sent messages. I sent one myself, to my friend Rita. She and her late husband, Jack, shared our anniversary date. In fact, they were guests at our wedding 21 years ago, celebrating their anniversary at our reception. They would have been married 60 years this year. Jack died a few months before Rick did. The thought of what she was feeling made me sad, too.

After the movie, I decided to sit out under the gazebo with a bottle of red wine. That’s where we would have ended our typical evening after any anniversary celebration, or any typical evening, for that matter. Only now, of course, Rick was no longer sitting across from me, chatting about our day. Now a small portion of his ashes are contained in the wind chime hanging above my head, and his responses as we talk are entirely in my head. After 20 years of marriage and conversation, I’m pretty sure I can fill in his parts accurately, but I so long to hear his words in my ears instead of in my mind.

And then, I chickened out. I avoided going to bed until 4am. I just couldn’t do it. I knew the minute my head hit the pillow, the pain would be overwhelming. I knew the empty bed would be torture this night. I knew I couldn’t compartmentalize the pain anymore.

Instead, I multitasked and avoided. I sat in my recliner, TV blasting first America’s Got Talent episodes, and then political pundits in the background as I began arranging photos, blogs, and poetry into a book. This meant looking at pictures of Rick and our past, but putting a sort of veil of obfuscation between really seeing them and really feeling their impact. I can do that. Can most people? Look but not see? Look but not feel? Do as I did, and put a little veil of separation between what’s in front of my face and the feelings that the photo can invoke? Of course most people can. Otherwise, when we’re out in public, we’d just walk around crying in front of others, and who does that? Anyway, I just didn’t want to go “there.” I wanted to dull it all and avoid the pain. When I finally felt it was safe, and I was tired enough to fall asleep the second my head hit the pillow, I went to bed.

Just as those who avoid history are doomed to repeat it, so are those who avoid grief doomed to have it build into a tsunami. As I lay in bed, I realized I felt a bit catatonic. I didn’t want to rise and do any of the things on my to-do list on this last day of vacation. I didn’t have the heart or the energy to do anything – or nothing. I just lay there, zombie-like.

Why? What’s wrong with me? What is it?

Oh, yes, Rick is dead, and I can’t stand it anymore. I can’t stand trying to go on without him. I can’t stand suppressing – or even facing – the grief. I DON’T WANT THIS. I WANT HIM BACK. THIS GAME IS OVER. BRING HIM BACK – NOW!!!!

I want my lover back. I want to touch him, hear him, feel him, hang out with him, talk to him, share my life with him.

I WANT HIM BACK!

I want to rage and scream and wail about this.

Thank God the windows were closed up and the AC was on. Otherwise, they’d come cart me to the loony bin.

And so, I had my little temper tantrum. I vented my spleen, as they say. And it felt awful and good at the same time. I thought I was doing so well, thought I was “handling it.” And maybe I was; maybe I am. But this morning, it all disappeared, and all the sadness in the world built up inside and spilled over.

And all the fear that I can’t live without him, and the loss of everything I held dear about him, and the awful awful pain of really knowing, really getting, that I’ll never ever see him or touch him or hold him again, and the longing for the comfort I felt in his arms – it all came back with a vengeance, and I raged, and I wailed, and I cried, and then…

And I have lots on my to-do list today, so I’d better get up and get going.

3 Replies to “Happy Anniversary to Me”