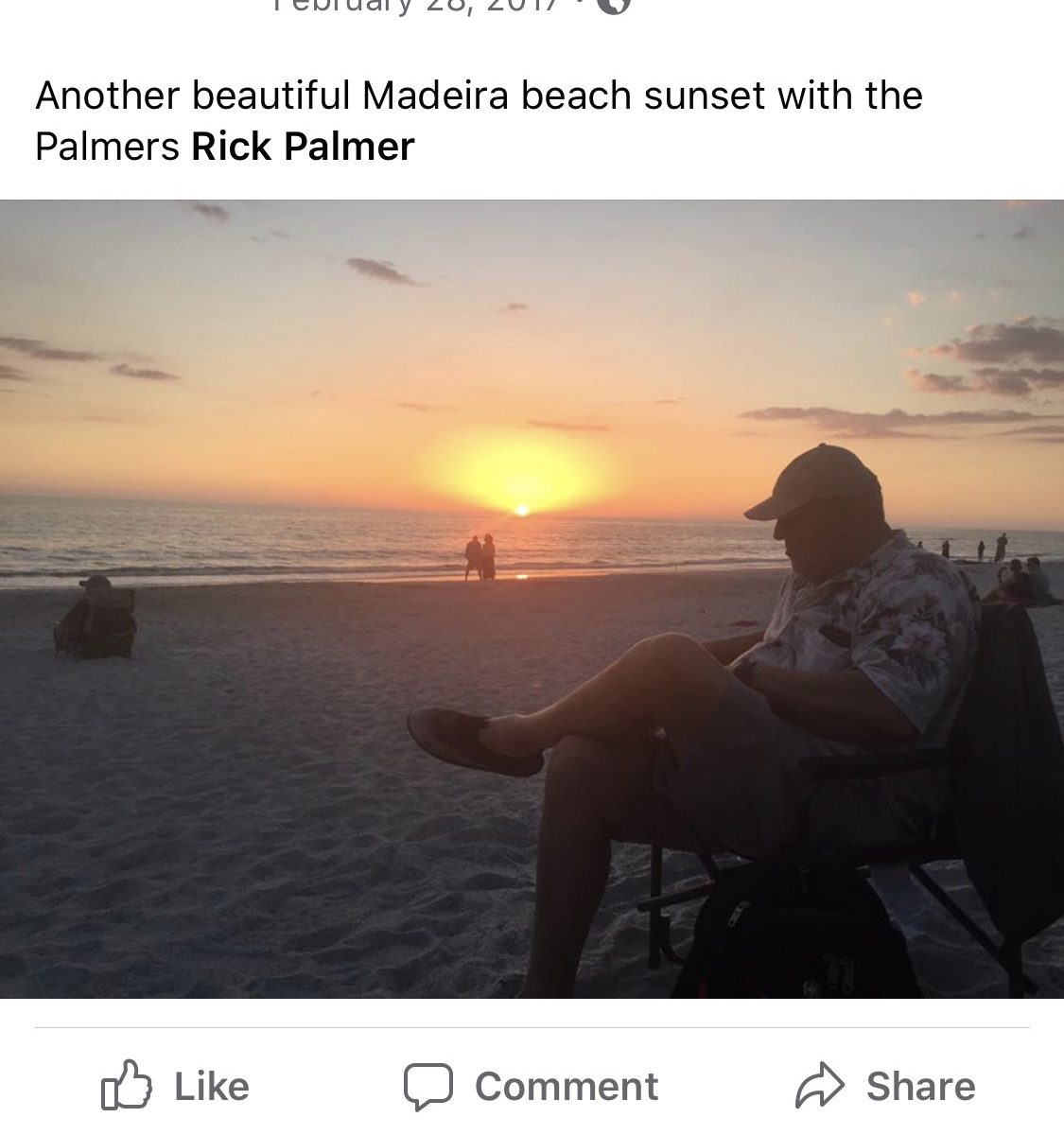 My friend Jo sent me a Facebook memory. Three years ago today, I was with Rick on the Florida gulf. We were sitting with Jo watching a gorgeous sunset in Rick’s favorite spot on Madeira Beach. I sat staring at the photo, unable to remember exactly how I felt that evening. Despite the beauty of the sunset, I know I wasn’t feeling pure bliss. I know my mind was at war with itself, constantly battling to enjoy the moment, carpe diem and all that.

We had learned only months before that the odds were he wouldn’t be here much longer. He had just finished his chemo and radiation treatments and we celebrated by driving to Florida. Knowing that this was about the best and happiest thing we could do together, that part was good. Perfect. And I smiled at him, and we held hands, and we kept telling each other everything would be fine. But we both knew in our hearts that it wouldn’t be.

The doctors said even if they got the tumors the first time, they’d be back. They said he had about a ten percent chance after that. Maybe 9 to 12 months? Maybe more. Maybe less. But no matter how good their predictions, no matter how positive we tried to be about his chances, we knew that we had a finite amount of time left. That we had to make the most of the days or months we had. And we did.

So there we were, exactly three years ago today, enjoying one of our last sunsets together. And six months later, he was gone.

And I look at this picture with such mixed feelings. Such joy that we had each other for as long as we did. Happiness that I met him at all – as a 30-something spinster who never thought she’d find true love. Thrilled that he loved me back, maybe even more than I loved him. Lucky that we had the twenty years we enjoyed together, playing and fighting and loving, until he was gone and I was grieving. But, wow, those years were fantastic!

And then my mood fluctuated, and I started to cry, and to be honest, a few seconds later, I grew angrier than I have in a long time, and I yelled out loud, FUCK CANCER! How dare you steal my happiness from me! It isn’t fair! And I felt powerless against my rage as I sat here alone in our house – even after three years, even after coming to terms with my loss a long time ago.